Posted About Eight Years Ago by Heather Roberts

REDMOND, OR -- City officials revealed plans for the historic building that will become Redmond’s next City Hall, Wednesday night. Neighbors got their first glimpse at an open house, and had a chance to ask questions and provide feedback to the city and architects.

Troy Ainsworth, with FFA Architecture, says working with the former Evergreen Elementary building has been an adventure. "For the original 1922 building, we didn’t have any drawings for the building, so we needed to carefully measure the building. But, we also really needed to look at things. We were looking under floors and taking down ceilings; it was a voyage of discovery. The first thing is, ‘what are we actually working with.’"
The renderings reveal a building exterior that won’t look too different, although the site will include nearly 70 new parking spaces. The current City Hall has about 30. For the interior, Ainsworth says he wants to restore it to its previous grandeur. "Fortunately, with this building, most of the original pieces were in place still; most everything was there, it had just been messed up or covered up. So, some of this is just uncovering, and some of it is putting back what was there in the first place." The second story will also feature a large space available for public use, and potential commercial lease space. Council Chambers will be on the first floor, with direct access to the new parking lot.
Some neighbors were concerned with the impact construction and future traffic will have on the area. But, overall, most were pleased with plans to maintain the historic feel of the building while updating infrastructure. "People seemed, either through their lack of questions or the good things they said, people seem pleased with the design of the building – the things we’ve chosen to save, the look and feel of the interior, the values that are coming through. It seems as though there are concerns with the site, particularly the site edges – how does the site respond to the neighbors, the bigger plans the city has for creating throughways and bike lanes, that sort of thing," Ainsworth tells KBND. He says the feedback will be used to make adjustments before the design is finalized in the next couple of months.
Ainsworth expects construction to begin in October, and will take about a year. 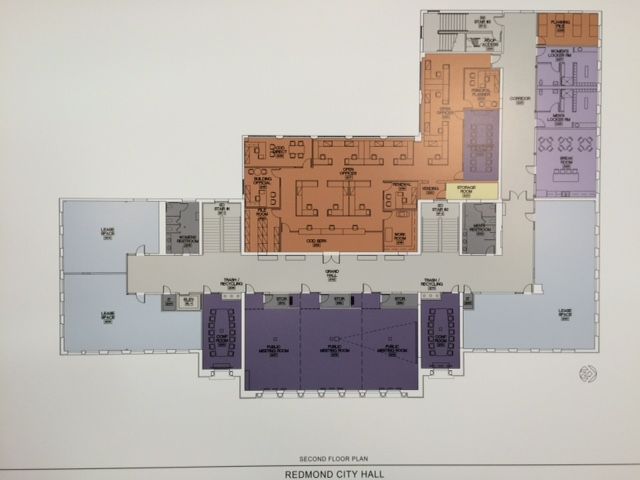