Frank Bonacquisti started out in Portland radio at 16 years of age. He first went on the radio in Bend in 1977 as "The Count." He hosted the KBND Morning News from 1990 - 1995, then again 1997 - 2005 and now, back again, for good this time, since 2010. In between he has been on the radio and worked as a professional voice talent, among other things, from Portland to Palm Springs and on the island of Maui. Frank sees himself as the Master of Ceremonies for the Morning News, a fast-paced 4-hour block of full-service news and information. Like he'll tell you, he's not a newsman, he just plays one on the radio. He's actually a News Personality and has had great success with endorsements for many clients. Frank and "the Countess" married in Bend in 1978 and enjoy taking their 3 grandsons to enjoy the beauty of Central Oregon. 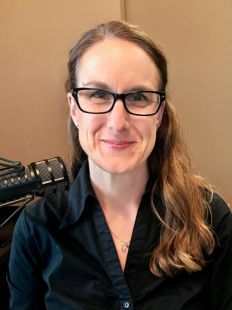 Heather Roberts is an award-winning journalist who has been covering news in Central Oregon since 2006. Through her more than 25-year career, she has worked in nearly every position in radio and television newsrooms, starting as a live truck operator at KATU in Portland. At the age of seven, Heather decided she wanted to deliver news on the radio, and is thrilled to be back working her dream job. She also runs a regional news service, providing important content to radio stations across Oregon. Heather and her husband raised their two children in Redmond and are now proud “dog parents” to a pup adopted from the Humane Society of Central Oregon.