BEND, OR -- A Salem man suspected of trafficking narcotics, led Central Oregon Drug Enforcement detectives on a pursuit and was eventually arrested after an hours-long manhunt, last week.

According to CODE, Chad Pomelow was a frequent visitor to the Bend home of Kristine Kyner, who was under investigation by the team. Detectives tried to stop Pomelow, last week, as he was parked near the Bend Airport, but he took off. After driving over spike strips, he ran from his car and detectives lost him.
Later Wednesday morning, police stopped Kyner’s vehicle near 27th and Butler Market Road. Pomelow was found hiding in the vehicle and was arrested. Kyner’s 6-year-old daughter was taken into protective custody.
Detectives executed a search warrant on Kyner's home on Barton Crossing Way, where they say they found user amounts of heroin and meth. 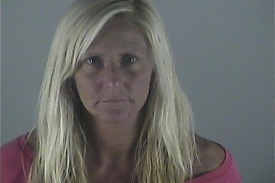