BEND, OR -- Bend Police are investigating social media reports of a sexual assault near River Bend Park, but so far have not been able to substantiate the claims.

Warnings have been circulating on Facebook this week giving an account of a woman attacked on the River Trail at 5 a.m., Sunday. The post provides specifics of the 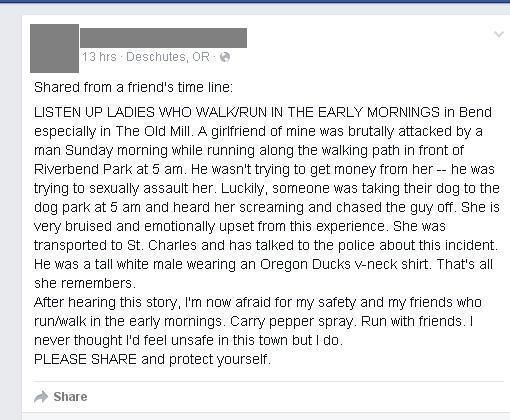 incident, including that the woman was transported to St. Charles and has talked to police.

But, Bend Police tells KBND News that investigators are still interviewing the person who originated the Facebook post and are still trying to contact the victim. So far, they have not been able to substantiate the report.
UPDATE: The original Facebook post has now been removed the user, replaced with another: "It turns out that the attack was not random, rather it was a case of meeting a stranger through a dating app and being attacked by that person."  Although, police have been able to confirm those details, either.
Read All