BEND, OR -- Deschutes National Forest officials suddenly find themselves with a big trash problem at Wanoga Sno-Park. "We had a very busy time with good snow over the holidays and I think that brought a lot of people out to enjoy themselves but it also brought a lot of people who, unfortunately, left their sleds behind and dumped them there," Jean Nelson-Dean tells KBND News. "I think, as people saw them being dumped, it kind of increased the problem."

She says they’ve recovered hundreds of broken sleds in just the past couple of weeks. "We have had problems in the past, but it is certainly a large problem now. We’ve looked into whether they can be recycled or if there was some way we could get rid of them, but there isn’t." Nelson-Dean says the material can’t be recycled and
disposing of all of them at the landfill will be costly but necessary. 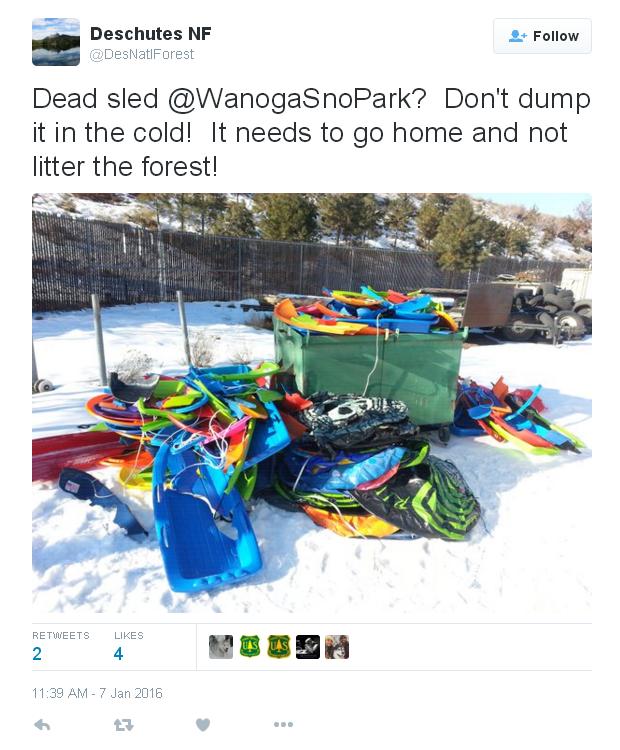 The Forest Service tried to be polite about asking everyone to clean up after themselves, "We did put up some signs asking people not to dump their sleds but to take them with them and discard of them at home. Unfortunately, we just got more sleds. And I think it’s definitely one of those problems that somebody sees somebody doing something and they think they can do it too."
Nelson-Dean tweeted a picture of the problem Thursday, in an effort to ask all visitors to pack out broken sleds and other trash, so the sno-park is safe and clean for everyone.
Read All