COOS BAY, OR -- The Coast Guard has suspended the search for two fishermen who were lost when their boat crashed into a jetty on the southern Oregon coast. One of the missing is reportedly Josh Paulus, a 2002 graduate of Mountain View High School in Bend.

The captain of the Eagle III made it ashore after the accident and was picked up by a good Samaritan who dropped him off at USCG Air Station North Bend. His condition is unknown. 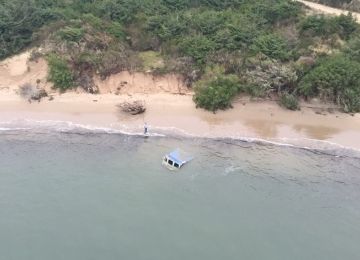 The search began at 8:30 Tuesday night when a distress beacon was picked up by the Coast Guard. Searchers later found debris from the crabbing vessel, and the body of a third crewman.

The cause of the accident is under investigation.
Photos of the vessel's debris field, courtesy of the USCG.
Read All