BEND, OR -- Two people were hurt and three face charges, after shots were fired during a fight in Northwest Bend, early Saturday morning. According to Bend Police, a group of five people were walking near NW 15th and Newport and got into a verbal – then physical – dispute with three men at a house, just before 3 a.m.

During the fight, Walker Henneke (pictured left) allegedly went into his house and returned with an AK-47 assault rifle. Investigators say he fired several shots, hitting Erik Menezes and Blake Blevins in the lower body.
CERT units used gas to force Philip True, Maxwell Haldeman and Henneke out of the home. They all face charges in connection with the incident. The rifle was later found in a neighboring backyard. 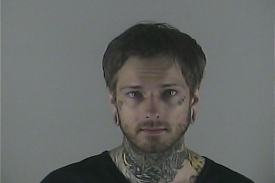 Henneke is charged with Attempted Murder, Tampering with Evidence and Reckless Endangering, among others. True (right) is also lodged at the jail, charged with being a Felon in Possession of a Weapon, Probation Violation and Disorderly Conduct. Haldeman was cited for Disorderly Conduct and ordered to appear in court.
Read All