SALEM, OR -- The State Parks system is tweaking its reservation system to account for the anticipated rush on camp sites for the total eclipse, August 21, 2017. Several campgrounds at the coast and in Central and Eastern Oregon, including Cove Palisades outside Madras, are within the path of totality.

Chris Havel, with Oregon Parks and Recreation, says campers should start making plans, now. "Spend a few more days where you’re going to go, rather than just spend that one day. The roads are going to be very congested, there’s going to be a lot of demand for camping. If you can eek out a day or two before the event and get your camping reservation with a few days to spare, you’ll be happier and the roads will be happier."
The state park system accepts reservations nine months in advance, but it would normally be possible to get a reservation for August 21 by booking the maximum 14-day stay on November seventh. Havel tells KBND News, "We’re not going to take any reservations for the time around the eclipse until November 17; and that will allow everybody to get those extra days before or after the event without having to worry about the weird reservation windows, maximum stay lengths and all that stuff. We’re just going to try and make it easy for you and set all that aside."
Campgrounds inside the path of totality: Devil's Lake, Beverly Beach, South Beach, Silver Falls, Detroit Lake, The Cove Palisades and Farewell Bend. Campgrounds up to 30 miles outside the path of totality are also affected by the temporary change in reservation rules: Beachside, Cape Lookout, Washburne (yurts only), Honeyman, Nehalem Bay, Stub Stewart, Champoeg, Milo McIver, Ainsworth, Memaloose, Viento, Deschutes River, Tumalo, La Pine, Prineville Reservoir, Lake Owyhee and Wallowa Lake.
Havel expects sites will go fast. "I think it’s a good bet that by November 18, the choice spots will be taken. There may be a few left, here and there, around the eclipse; but the eclipse date will probably all be booked up. We take reservations nine months in advance, but there are others that take reservations a full year in advance or more, and that’s hotel rooms and even some other campgrounds in the state. They’re all booked. The moment they were available, they got snapped up. And, we expect that’s going to happen here, too." For more information, click HERE. 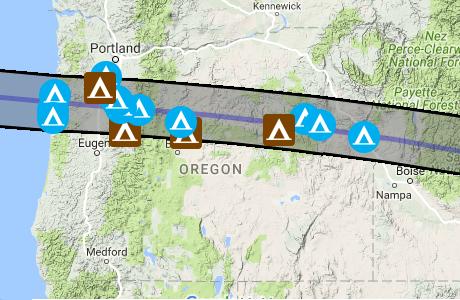