BEND, OR -- The family of a Bend woman murdered last summer is honoring her memory by giving away hundreds of children’s books on what would have been her 24th birthday, Thursday. Kim Snow, Associate Director of Neighbor-Impact’s Head Start program, says Kaylee Sawyer was passionate about kids. "One of Kaylee’s favorite books was Oh the Places You'll Go, by Dr. Seuss. So, each one of our 451 Head Start children will get that book. And, we’re hoping to be able to do this each year, in honor of Kaylee." 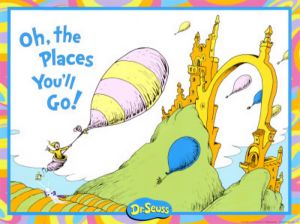 She tells KBND News Kaylee "really enjoyed reading and her birthday happened to be on Dr. Seuss’ birthday. Her family wants to pay it forward and allow each child in our Head Start Program have the opportunity of building their libraries and getting a book." Snow adds, "We serve the neediest of the needy. Oftentimes our children do not have a lot of books in their library, so it’s really a great way, in Kaylee’s honor, for them to pay it forward to children and families that just really need it."

Snow says she and many of her staff worked with Sawyer nearly 20 years ago, when she was a preschool student at Bright Beginnings, which later became Head Start. "Kaylee’s looking down on us, I feel and kind of saying, ‘I believe in everything that you guys did and I want you to still keep doing that good work that you do with children and families.’"
The book giveaway is facilitated by "KK Reader's," a nonprofit started by Sawyer's family who says she she called herself "KK" when she was little because she couldn't say "Kaylee." A foundation representative tells KBND News Sawyer was always proud she shared a birthday with Dr. Seuss and she spent hundreds of hours reading with her family. KK's Readers asks the community to purchase copies of the book to be given to future Head Start classes. Sawyer wanted to be a dentist and the Awbrey Dental Group, where she worked, has set up a scholarship fund in her name.
Former Central Oregon Community College campus security guard Edwin Lara is charged with Sawyer’s July murder. His trial is slated to begin in October. The Deschutes County District Attorney has said he will seek the death penalty.
Read All