BEND, OR -- A driver reaching for his cell phone is blamed for a Bend crash that shut down a section of Wall Street, last night.

According to police, Cameron Cox hit a power pole near Northwest Wall and Portland, just before 8 p.m. The pole fell into Wall Street Storage, causing several thousand dollars in damage to the building. 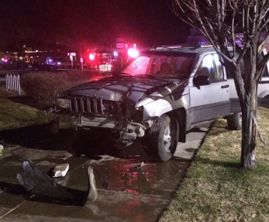 Power was disrupted in the area for several hours and Wall was closed between Lafayette and Portland as Pacific Power crews replaced the pole.

Cox told police he veered off the road after taking both hands off the wheel to reach for his phone.
Read All