LA PINE, OR -- Work on the new Highway 97 over-crossing at Wickiup Junction remains stalled, after the Oregon Department of Transportation discovered the land was sinking under the weight of the new bridge and adjoining ramps. Crews stopped building the bridge and ramps in May. 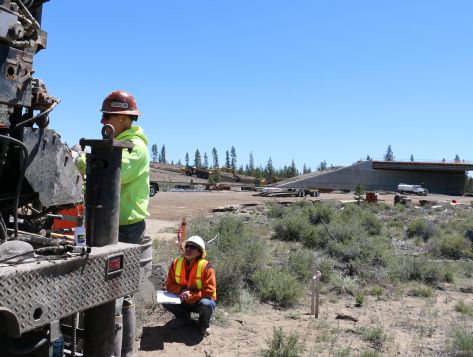 ODOT’s Peter Murphy says crews recently drilled five test wells at the site (right), "To be able to see exactly what the dirt, or lower layer, shows us, and then send some electrodes down to do some further probing – kind of like sonar, where you send a pulse out and it comes back to you. And, what we see on the backside of that will tell us more about the rock or the dirt, or whatever it might be that’s down there; and based upon that information, we’ll decide what the next step will be." He adds, "The crews that have been at work out there are trying to remove some of the ramp material that has weighed down the whole ramp, itself. This all gives us further information about what’s going on down below, and that’s the key to where we’re going to go with this. The more we can get information about what’s underneath, it’s going to give us a better idea of how to fix it."
He tells KBND News the problem is the land under the new ramps leading to the over-crossing. "The ramps themselves, where we’ve been building up to the bridge, have been sinking – almost a foot or so, and the bridge itself had settled, as well. When you add weight at ground level it compacts what’s underneath, and that compresses and that is to be expected as you get into this kind of a project. It’s the ‘how much.’"
The bridge is designed to take traffic over the railroad tracks and improve safety along that stretch of Highway 97. Murphy says there’s no timeline to resume construction, although he’s hopeful they’ll receive test results in the next couple of weeks, so they can determine their next move.
This the second delay for the $17 million project just north of La Pine. In August, a 173' beam was damaged when it fell while being placed on the structure. Murphy says the project is not yet behind schedule because work was actually ahead of the contracted timeframe when the soil problems were discovered.
Read All