BEND, OR -- A well-known pest is making a comeback in Central Oregon. Motorists may have noticed significant damage to area pine forests last year, caused by the Pandora Moth in it's larval form. This year, those larvae are full grown adults and the area is in the midst of what the U.S. Forest Service calls a 10-year outbreak.

Forest Entomologist Rob Flowers tells KBND News, "When they move into this outbreak cycle, they have a two-year life cycle. It's usually three to four generations, so about six to eight years of elevated population. What we typically see during that time is a year of defoliation, where they're in a larval form feeding on trees they like - they like lodgepole pine and ponderosa pine. Then they shift in the second year to mostly an adult phase." That adult phase is what we're seeing now.
These infestations have occurred before, but they're not common. "We've done some tree ring analysis; the way we are able to chart these outbreaks is looking at the tree rings. We can actually see when defoliation events occurred," says Flowers. "We can trace that back over about 600 years in Central Oregon and have found that there have been about 20 or so outbreaks of Pandora moths." 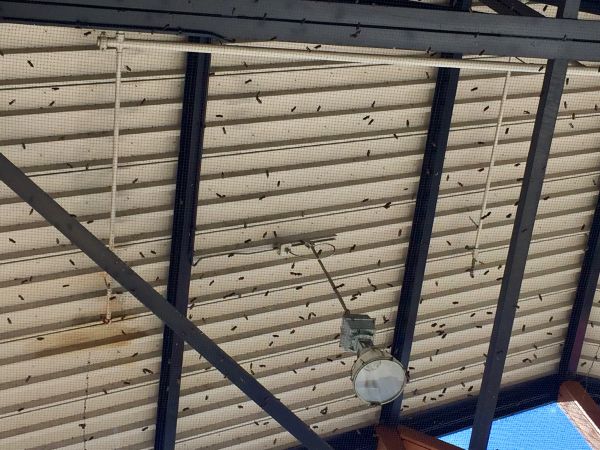 While unnerving due to their large size, Flower says the moths pose no danger. "There's no human health risk there, or to pets, or to anyone else. It's just a nuisance having all these large things flying around your house at night. Kind of the take-home message is that this is part of a natural lifecycle, so there's no cause for alarm. This is just sort of one of those natural processes that we see both in the forest and in also our urban and community forest environment."
The adult moths can be seen throughout Central Oregon in July and August.
Read All