BEND, OR -- A Bend couple is accused of stealing two high-end bikes from St. Charles Medical Center, last week. The bicycles were locked up outside the Bend hospital when they were taken August 4. Bend Police received an anonymous tip that two suspects were at this week's Munch N Music concert, and officers on foot patrol downtown tracked the pair.

They took 44-year-old Carrie ODonell into custody at 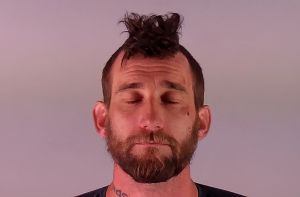 Drake Park without incident. But, police say in an effort to evade capture, 35-year-old Thomas Dunaway (pictured, right) jumped into Mirror Pond. He swam for about 25 minutes while numerous officers responded, and eventually came to shore under his own power where he was arrested.
Both had outstanding warrants from California and are charged with Theft and Criminal Mischief. Dunaway is also charged with Escape 3 and Resisting Arrest.
Top Photo: Security footage of suspects at SCMC-Bend, courtesy Bend Police
Read All