REDMOND, OR -- The Multi-Agency Coordination Center (MACC) is now operational at the Deschutes County Fairgrounds in Redmond. "Federal, state, local – all government agencies – there’s more than 20 represented here, from DEQ to ODOT to school districts," says Julianne Repman, with Bend-La Pine Schools. She tells KBND News, "We’re all at the table together; we take off those hats from our agencies." 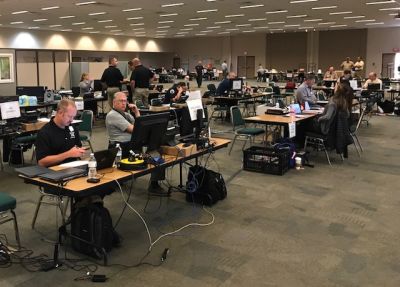 Planning for the MACC (right) began nearly two years ago, in anticipation of the August 21 eclipse. Repman says it's the largest, pre-planned response effort ever established in the Tri-County region. "The effort here is to protect lives, natural resources, and then – in this event – we want to make sure that both our residents and community members have everything they need to be safe, and also to have a good time."

Traffic and wildfire management are top priorities, right now; but Repman says they have to be ready for anything. So far, the center isn't hearing a lot of concerns from the public, but she says they are getting a lot of questions. "I think what we’re seeing is that people might be a little bit surprised that what we have anticipated is actually becoming a reality. But, they’re dealing with it really well. We’ve got great people coming in to town and we’ve got great people as resources supporting them to keep them safe." 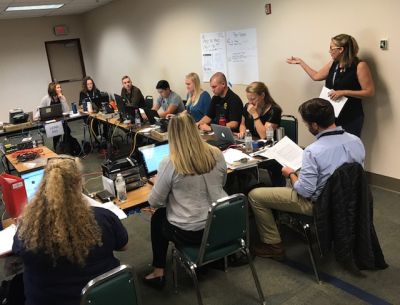 Repman manages the Joint Information Center (JIC), inside the MAC, staffed by public information officers from MACC agencies. The JIC (left) is tasked with getting important information out to the media and public over the next several days, via the Central Oregon Emergency Information Network.