REDMOND, OR -- As the region's only commercial airport, Roberts Field is seeing a steady stream of eclipse viewers. Airport Director Zach Bass says planes are typically about 90% full this time of year, but that's already increasing and he expects they'll be 100% full by Monday.
Bass says it's tough to know just what's coming. "We've got a lot of contingency plans in place, if something does occur. We've been speaking with all our stake holders: TSA, for example, the airlines, the car rental folks out here. Our security individuals, we're up-staffing during this weekend and Monday and Tuesday, and we'll have our people available to help out. Basically, we're doing everything we can because we're not quite sure what to expect when it comes to the customers inside and outside the facility during this timeframe." Bass says because the airport is open 24-hours, some people may stay overnight inside, but they're not allowed to camp in the parking lot. Bass says they were forced to put up signs on lot gates because people have asked. 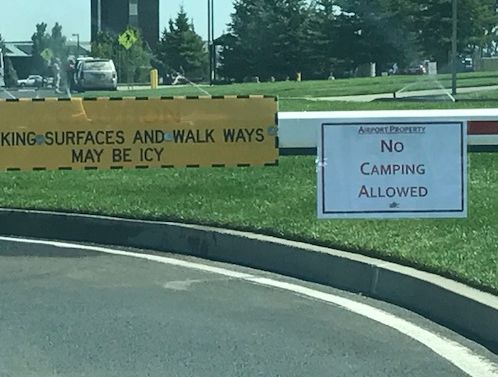 Car rental counters at Roberts Field have been consistently busy; reservations are booked solid for the next several days. For travelers like Patty Zaremski from Torrence, CA, who made advanced plans, it's been mostly smooth sailing. She flew in to Redmond Thursday afternoon an is looking forward to an eclipse-related family reunion in Central Oregon, this weekend. "We're staying in Sunriver. We planned this last October and I had no idea this would be such a big deal." She's driving to Mitchell Sunday night and plans to disperse camp since all traditional campgrounds and hotels are booked. Zaremski tells KBND News, "We were going to go to Madras. But, when we realized that everybody and their brother is going there, we decided we didn't want to be on that road, in all that traffic." Traffic was a common concern among visitors.
Ryan McDonald flew in from Redwood City, CA to stay with family. He's nervous for the crowds and says his plane was full of eclipse viewers. McDonald has always had an interest in astronomy and is "super excited to be here and view something that doesn't happen very often."
Eclipse Coverage on KBND is supported in part by Awnings Unlimited. Shade yourself from the sun with Awnings Unlimited at 5541-389-1619 and awningsunlimited.net.
Read All