PRINEVILLE, OR -- Three security guards working at the Symbiosis eclipse event at Big Summit Prairie were arrested this week for unlawfully entering an RV and detaining two guests – one was injured during the incident. The guards allegedly suspected the couple was making drugs but Crook County deputies say the man and woman were not, nor did the guards have the legal authority to take action.

Investigators arrested 22-year-old Jared Leoney of Bothel, WA, 37-year-old Ryan Schroeder of Arlington, WA and 44-year-old Thomas King of North Bend, OR. King also had a gun, although authorities say it wasn't displayed during the incident. While he had a concealed weapons permit out of Coos County, one of the conditions of the event permit was that no guns be allowed on premises.

Sheriff John Gautney says it’s just one example of issues that occurred at the mass gathering permitted for 30,000 people. "There were a lot more people up there than were supposed to be there. Because of that, we anticipated there would be a lot more problems.  And, this thing kind of just kept ballooning and ballooning, but the number of calls that law enforcement was actually called there for were not nearly to the level you would expect there were." 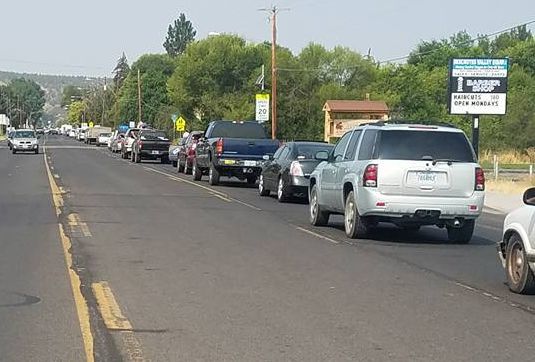 He tells KBND News, "As people were starting to pack up, there were some domestic calls up there, there were some overdoses, there were some medical calls. But, for the number of people there, they were minimal. So, I think it was not as bad as it could have been. In fact, I was rather pleased. The biggest problem that we had to deal with was the huge amount of traffic."
The three security guards have been released from jail and the Crook County District Attorney’s office is looking into whether trespassing and assault charges will be filed.
Read All