TERREBONNE, OR -- About a dozen members of a Redmond church took a big leap of faith, Sunday afternoon. They bungee jumped from the High Bridge, 300' above the Crooked River, at Peter Skene Ogden Scenic Wayside. Six of them were also baptized. Mission Church Pastor Ryan Emerick tells KBND News, "We don’t want to baptize people through the bungee jumping; they’re not supposed to get that close! We’ve got people who are bungee jumping and some of those people are getting baptized, as well, so we have a baptism tank out here in the park. And, other people aren’t bungee jumping but still wanted to take that step and get baptized, so we’re doing both. Either way, it’s just a day full of fun and celebration." 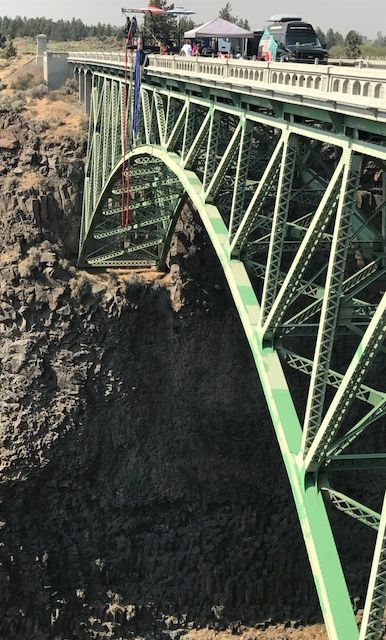 Following her jump, Kayla Watne described it as amazing, "It happens so fast, you don’t really get a chance to feel much other than fear. And fear is 100%, then. So, it’s just super scary and you can’t really think during that time." She says after bouncing at the bottom of the bungee she tried to just take in the scenery and enjoy the ride as they hoisted her back to the bridge.
Pastor Emerick says most who took part were motivated by overcoming their fears, and both jumping from a bridge and getting baptized take courage. "One of our most natural, primal fears is the fear of falling; fear of dying. And, when you overcome that and trust in something other than yourself, then you learn you can step out boldly in life and do other things. You can apply for a job, or start a business, or get engaged. So, we want to teach people the value of taking bold steps of faith." Michelle Delpit wore a shirt that said “Faith over Fear” when she jumped (pictured below). After returning to the bridge deck she said, "I don’t want to be scared by anything anymore. And now I can’t be."
Central Oregon Bungee Adventures runs the highest commercial bungee jump in North America at the High Bridge north of Terrebonne. The State Parks Department approved the activity in the historic area, earlier this year. 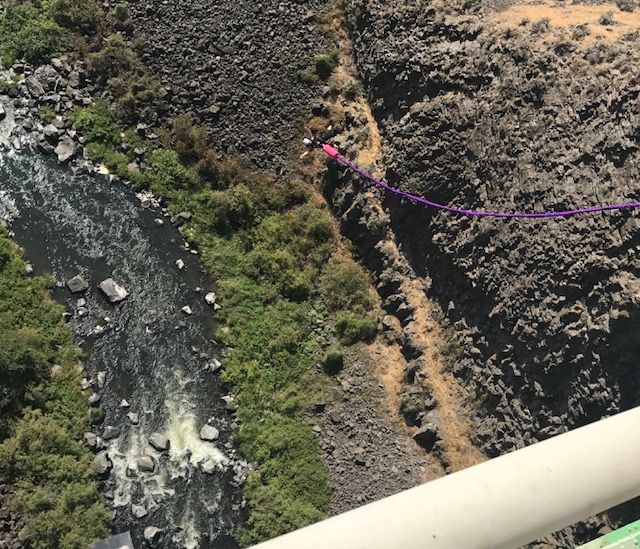