BEND, OR -- Governor Kate Brown stopped in Bend Monday as part of a statewide tour celebrating the $5.3 billion, 10-year transportation package passed by the Legislature. She gathered with representatives from the Oregon Department Transportation and Commute Options, Crook and Deschutes County Commissioners, Bend City Councilors and other dignitaries for a ceremonial bill signing at Highway 97 and Cooley Road, an intersection slated for improvements thanks to the package.

It’s expected to help fund two major Highway 97 projects in Central Oregon. Governor Brown told the crowd, "We are able to make significant investments in the Terrebonne safety project, as well as, hopefully reduce congestion and create a better, safer corridor on Highway 97. Not only will the package improve the safety and condition of our roads and bridges, it’ll help support thousands of family-wage jobs and help local businesses get their goods to market more efficiently." Work on the $20 million Terrebonne project should get underway in 2021. The bill also includes $50 million in work at Highway 97 and Cooley Road, in Bend. That project is slated for construction in 2025. 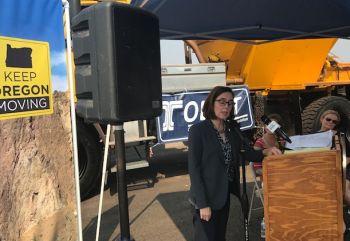 At the event, House Republican Leader Representative Mike McLane (R-Powell Butte) praised the bipartisan effort that led to the bill’s approval. But, he said, "I want to acknowledge that not every aspect of this bill, do I celebrate. It took compromise." Governor Brown tells KBND News, "We worked very hard to make sure we addressed the needs of communities throughout the state of Oregon. Is the package perfect? Absolutely not. But, I was pleased; it is the most comprehensive transportation package Oregon has ever seen."
The bill aims to ease congestion, provide dedicated funding for mass transit and the Safe Routes to Schools program, and help prepare transit infrastructure for a large earthquake. Gov. Brown calls the bill “historic,” saying the benefits would be felt by generations to come in both rural and urban areas. "We worked hard to make sure that spending in each of the regions was proportional. And, frankly, the congestion in the Portland metropolitan area is impacting businesses in Ontario, Oregon and Medford, Oregon because folks are really struggling to get their products to market or get the materials they need to continue construction. So, we are making significant investments here. It’s a win for Central Oregon; it’s a win for all of Oregon."
Read All