BEND, OR -- Bend city officials kicked off Welcoming Week, Friday. Brad Porterfield, with the Latino Community Association, says it’s about celebrating all types of people, regardless of where they’re from. "We think it’s really important to be proactive and send a message that our community is welcoming, and then do the work to educate and raise awareness about our immigrant and refugee neighbors and what they experience and how we can make our community thrive by embracing them and learning more about their cultures."

When City Councilors agreed to become a Welcoming City in June, some citizens worried it was a shift toward becoming a "Sanctuary City." But, Porterfield says the Welcoming City designation doesn’t have anything to do with immigration status. "I think that’s a common misconception, possibly. Sanctuary state and sanctuary city generally means that we’re just not going to use our resources, taken from our taxpayers and our residents, to enforce immigration law because it’s not our job." Oregon law already prohibits the use of state or local resources to enforce federal immigration law.
Porterfield says this week’s festivities are about celebrating diversity, not politics. "Welcoming City is emphasizing the fact that immigrants and refugees, in particular, face unique obstacles and barriers to thriving in our communities because of just cultural differences, language differences." He tells KBND News, "Welcoming America, the national organization that the city of Bend is now an affiliate of and our organization is a member of, is nonpartisan. They’re trying to stay away from politics and just focus on the people and the stories; looking at communities, cities in particular, where they are embracing their immigrant and refugee neighbors and businesses, and how those communities are thriving."
Bend City Councilors will sign a Welcoming Week proclamation at Wednesday's City Council meeting, and the week wraps up with the Latino Community Association’s annual festival of cultures Saturday at Redmond’s Centennial Park. 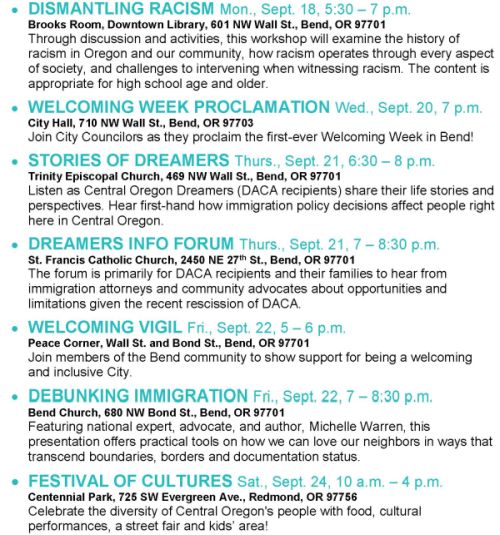