MADRAS, OR -- A Sunriver man shot by police in Madras after a car chase remains hospitalized. Investigators have released more details of last week's shooting. According to the Jefferson County District Attorney's Office, Deschutes County deputies noticed two stolen cars traveling northbound on Highway 97 near Lava Butte, south of Bend, late Thursday. They pulled over the SUV near Robal Road, on the north end of Bend, and arrested 19-year-old Corey Gallagher of Portland (pictured). 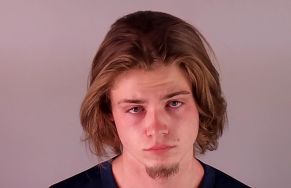 However, the minivan led police through Redmond, running over several sets of spike strips. The driver lost control and the pursuit ended at “L” Street, in Madras at about 11 p.m. The Jefferson County D.A. says 18-year-old Christopher Sweeney got out of the van with a pistol, and confronted officers. A State Police Sergeant and Jefferson County Deputy each fired their weapons. Both officers are now on leave, which is standard procedure after an officer-involved shooting.
Sweeney was airlifted to St. Charles Bend where he was listed in fair condition, Monday morning.
Read All