LA PINE, OR -- Two people and their two dogs were able to safely escape a fire inside their La Pine mobile home, Sunday morning. The residents called 911 after finding the ceiling around the woodstove pipe on fire. They tried unsuccessfully to put it out on their own, with a fire extinguisher. 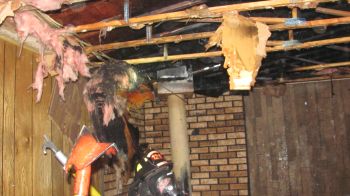 Arriving fire crews found smoke coming from the eves of the 140 square-foot double-wide mobile home. They were able to quickly knockdown the fire and stayed on scene just over an hour. The cause of the fire is under investigation.