REDMOND, OR -- Redmond's newest City Councilor is a familiar face around town. Tuesday night, City Councilors approved the appointment of Jon Bullock to the vacant seat created by the August resignation of Anne Graham. The appointment is effective immediately.

Dr. Bullock is the Executive Director of Redmond Proficiency Academy and has worked in Oregon’s public school system for more than 20 years. 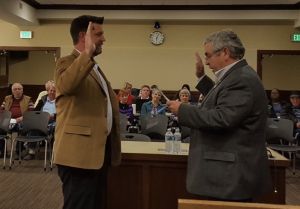 Prior to helping create the charter school, he served as Principal of Redmond High School. Mayor George Endicott says Bullock has a keen understanding of how public finance works, as well as policies that guide it. "He works with Redmond students and their families every day, bringing with him a unique and valued perspective to Council," Endicott said in a statement.
Bullock will complete Graham's term, which ends December 2018.
Photos: (top) Jon Bullock/Submitted Photo
(right) Dr. Bullock is sworn in by Mayor Endicott, November 7, 2017/Courtesy Councilor Ginny McPherson
Read All