BEND, OR -- The calendar may say winter is more than a month away, but the Oregon Department of Transportation started winter operations, Monday, in the High Desert. ODOT Assistant District Manager Jim Scholtes says traffic cameras are now outfitted with infrared capabilities so road conditions can be assessed at night, even in the most remote locations. "We may only have one truck that’s going to take care of Highway 20 from Brothers, all the way to basically Burns. So, which way does he need to go? So, we’ve got cameras that are up on Horse Ridge, if he has to come back and go west, if it’s snowing there. Or, we have cameras all the way out to Hampton. So, that way, he can make an informed decision on which direction he wants to go." Crews are now scheduled for near round-the-clock coverage, and they've already been out de-icing chronic trouble spots, like Lava Butte, over the past couple weeks. 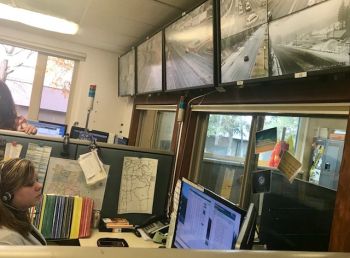 ODOT has expanded its Incident Response program in Central Oregon, just in time for winter. Incident Response Specialist David Moyer tells KBND News they help drivers stranded on the side of the road, whether from a crash or simply needing help chaining up. It’s work that used to be done by snow plow drivers. "So, it keeps that snow plow on the road longer, so they’re not having to be outside their vehicle. Maybe if it’s a crash, we might be there for two hours. Well, if that snow plow guy is sitting there for two hours, that’s one loop of 12’ of highway that’s not getting plowed."

Moyer says last winter's extreme weather taught crews a lot about the importance of being prepared. "You have to anticipate the long days. Last year, it was just day after day after day after day after day; and, you know, making sure everyone gets the rest. That’s the biggest thing with our folks, is trying to get them rested because they’ll go and go and go and go." He adds, "I’m not ready for another one. But, I mean, who is – right? I think people are more prepared this year; I’d hope that they’re more prepared, just because of what happened last year. It’s one of those things – Mother Nature is just going to throw at us what she throws at us and all I can say is, please take the time to be prepared." He says that preparation includes winter tires, extra windshield wipers and be ready to slow down when things get slick.
Long Range Forecast Predicts Snowy Winter
Last year, ODOT spent about $4.5 million on winter operations, including plowing, de-icing and trucking out the massive amount of snow that crowded Central Oregon roads. Jim Scholtes says this year’s budget is again $2.7 million, which is what the agency plans for each winter.

PHOTOS: (Top) An Incident Response crew assists at a crash on Highway 97 in Bend.