BEND, OR -- For some, Thanksgiving signals the start of the holiday shopping season. But, Rod Porsche, with The Downtown Bend Business Association, hopes Central Oregonians won’t spend too much on Black Friday and save some for Shop Small Saturday. "We get that Black Friday, there’s a role to play. But, let’s remember that Saturday is the place to get items oftentimes locally produced; you can’t find them online. Shopping small really helps your community. I mean, keeping your money in your community is really important on that day and throughout the year." 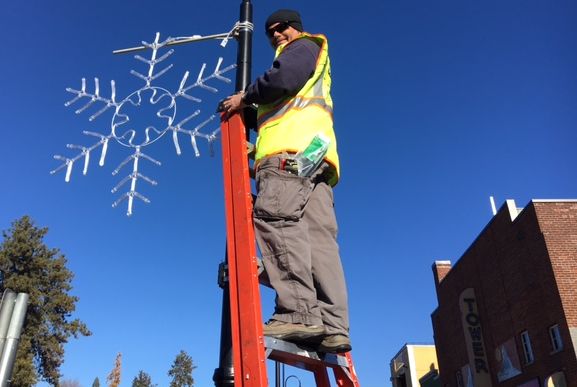 Bend is getting decked out for the holidays, and the city’s historic lamp posts feature something new. "Because we had such a successful Bend Oktoberfest, we got funding for 100 lit snowflakes in downtown Bend." Porsche tells KBND News they've been a long-time coming. "They’re up now and they just bring such holiday joy. It’s a game-changer for our downtown." Porsche says the snowflakes cost around $8,000, including the 10 more put on standby. Also new this year, twinkle lights in the tree canopies. Porsche hopes those will stay up year-round.
For those on your list who are tough to shop for, Porsche recommends Downtown Dollars. "If you buy Downtown Dollars, they are redeemable at any one of 125 downtown businesses; virtually every retail and restaurant, bar, they all accept them. It’s a great way to keep your money local." On Saturday, shoppers can enter to win a gift basket valued at over a thousand dollars, with downtown Bend’s Passport Event.
Also this weekend:
Read All