BEND, OR -- The Deschutes County Jail has been understaffed for more than a year. At one point in 2017, there were 20 vacancies in the Corrections Department. But Sheriff Shane Nelson says the agency is getting close to full staffing. "We’ve had some turnover; we’ve had some retirements." And, in some cases internal investigations that led to firings. "We’ve also had three additional FTEs [Full Time Equivalent employee], so that creates those openings," Sheriff Nelson tells KBND News, "And, it takes a long time to train a troop and get them up to speed where they can be a good resource at the jail."

He says the prolonged staffing shortage at the jail is a strain on current employees, "They have been working hard, making sure that we’re running our operation smoothly. But, we want to get our troops more help; we have six openings, right now." 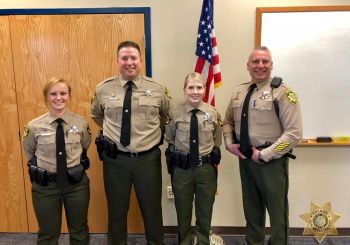 Sheriff Nelson adds, "We have three brand new Corrections Deputies that we just swore in this week; and I was in training with them on Monday. So, we’re doing what we can to fill those positions and make us up to full staff." Although, he admits "full" staffing may not be a realistic goal, "I don’t know that an organization ever gets to 100% staffing, just because you’ll always have attrition. But, I hope we get closer and I hope we’ll be there in about six months."