PRINEVILLE, OR -- History is being made at the Prineville Airport. A flying sportscar, dubbed the Samson Switchblade, is nearly complete and is expected to be unveiled later this spring.

Sam Bousefield is the Switchblade's Inventor and CEO of Samson Sky. He acknowledges some may be worried about the safety of a car that transforms into an airplane at the touch of a button, "We've tested this to certified aircraft standard, even though we're experimental and we don't need to, we're three wheels, classed as a motorcycle, so we don't need to do front and rear crumple zones or side intrusion protection, or rollover protection or anything like that, but we still do it. There's no flying car rules right now, there's nothing. We just look to see, well, what should be there, and that's what we're doing." The Switchblade is made mostly of carbon fiber and is street legal, with a specially modified engine that takes supreme gasoline. 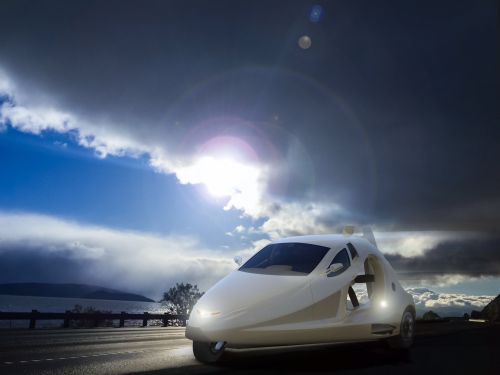 There are other flying cars in development, but Bousefield says the Switchblade is different than vehicles like the Pal-V Liberty, created by a Dutch company and unveiled at the recent Geneva auto show. "The difference is, that is a gyrocopter, which has a propellor blade at the top like a helicopter that's unpowered; it just acts as your wing and so it flies a little bit slower. We fly up to 200 mph, and we're high performance on the ground. We have the power and weight of a 2017 Corvette."

The vehicle will cost around $140,000 and gives each buyer the chance to build their personal craft in the factory with professional assistance, "We're a little bit different, we start with the kit, and then we add in a builder assist function which is based on a 10-station assembly line. So, a person would spend about three weeks helping out at each step of the way, and at the end, should have their Switchblade fully done, ready to drive or fly home." Users would need both a drivers' and pilots' license.
An official unveiling is planned for later this Spring, and Bousefield hopes to share the Switchblade with various law enforcement agencies first.
Read All