REDMOND, OR -- Republican candidates took part in a forum hosted by the Redmond Patriots, Monday evening, on their way to the May Primary. Patriots' Chair Bob Perry moderated the event, and says candidates who speak before the group do best to answer the questions as fully and honestly as possible. He tells KBND News, "We don't B.S., we don't pull punches, and we're certainly not constrained by political correctness." Two candidates for House District 53, as well as the four vying for the Republican nomination for Deschutes County Commissioner, took questions from the audience ranging from local government spending to marijuana, school safety, PERS reform and affordable housing. 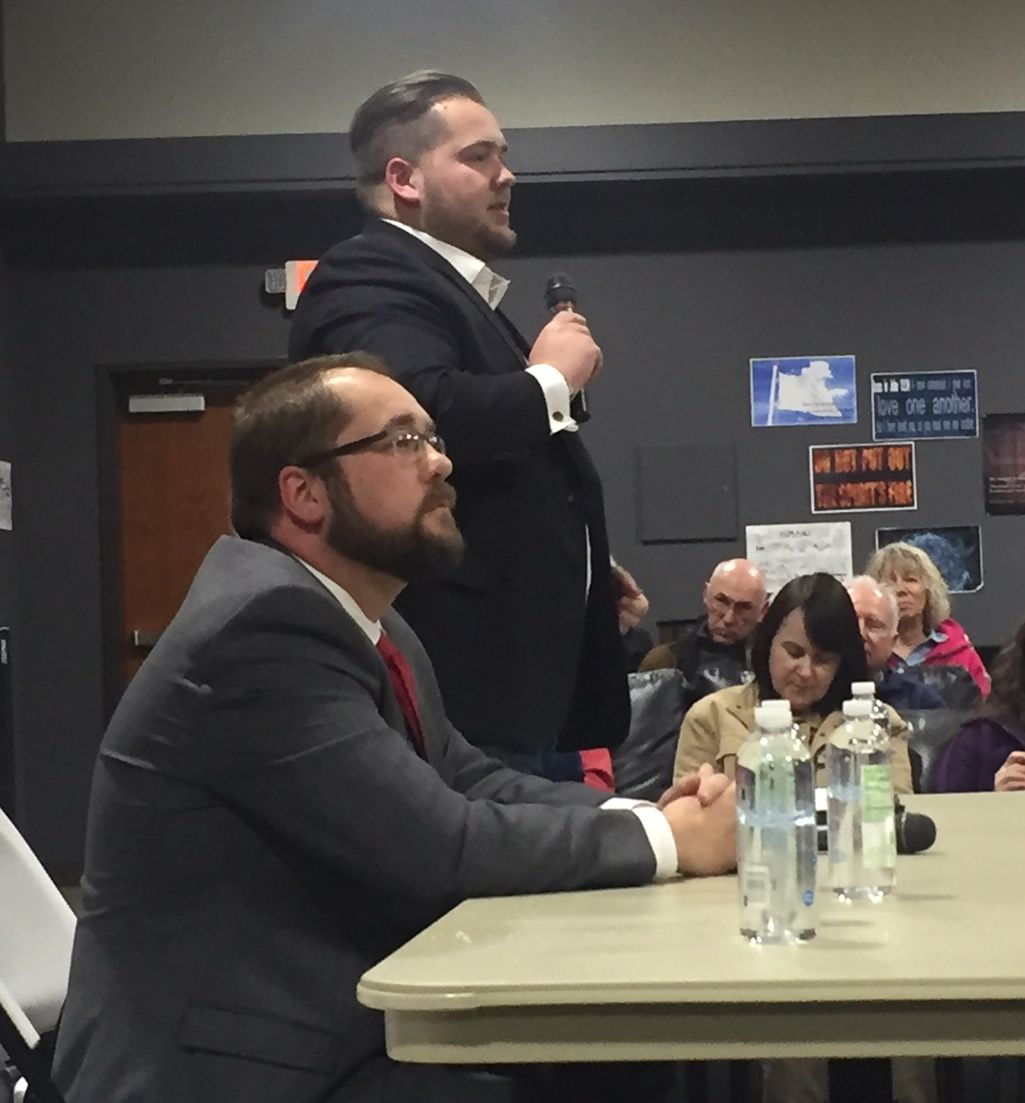 Jack Zika (right: seated) and Ben Schimmoller are running for the Republican nomination for the State House seat currently held by retiring Representative Gen Whisnant (R-Sunriver). Zika, a local realtor, talked about his two children, saying when it comes to schools, he's got "skin in the game." He wants to see PERS reform, "We do give our schools a lot of money, and it's just a problem getting the money to the schools. If you look at the states that are at the bottom for graduation rates, we all have something in common, we also contribute the most to our public employee retirement fund. Something needs to change." Schimmoller is a political activist and thinks party unity is the best way for conservatives to return Oregon to a common sense perspective, "It's good to have strong, contested primaries. it makes our party better, and it makes our issues stronger. And afterwards, it's important that we come together after the primary to really get behind our candidates 110%, because that's the way we're going to turn Oregon red." The Democrats vying for the District 53 seat are businesswoman Eileen Kiely and Dr. Bill Trumble.

Two Deschutes County Commissioner seats are up for grabs, this year. Incumbent Tony DeBone says, in his two terms in office, he's had to make tough decisions affecting everyone in the county; but he stands by the choices he's made, "We live in a growing place, so I strive and I do make sure that we're equitable in the process and statewide land use that we have, and make the best judgments for the citizens here." DeBone is opposed in the Republican Primary by Pisano's Woodfired Pizza owner Ed Barbeau (top: far right). He believes the Board of County Commissioners would benefit from his business experience, "It still comes down to decisions, doesn't it? Wanting to be a Commissioner is all about making those right decisions, considering how they effect Central Oregonians for years to come," Barbeau told the audience, "The right decisions, I make them every day, I've made them for decades." Amy Lowes is the only Democrat running for Position One.
At Monday's forum, incumbent County Commissioner Tammy Baney (top: second from left) was reminded that she ran as a fiscal conservative and asked to explain why property taxes have gone up 60%, while the population has only increased 30%, during her tenure. Baney pointed to her work on mental health services, more Deputy District Attorneys, more Sheriff's Deputies, and improved veterans' services. She told the audience, "What our job is, is to make sure that we meet the needs of the community. So, no; those numbers, in isolation, don't sound good. But, the question would be, 'what services do you not want me to provide?' or, 'What service did I provide that we did not need?'." Her opponent Patti Adair believes Baney has been in office too long. She says Deschutes County needs the change a new perspective would provide, "I felt like Tammy was the leader for the marijuana issue, and I just feel really badly what that's done to our county. So, I just feel like we can do better Deschutes County is a place where I can put all my energy and all my efforts." James Cook is the only Democrat running for Position Three.
Read All