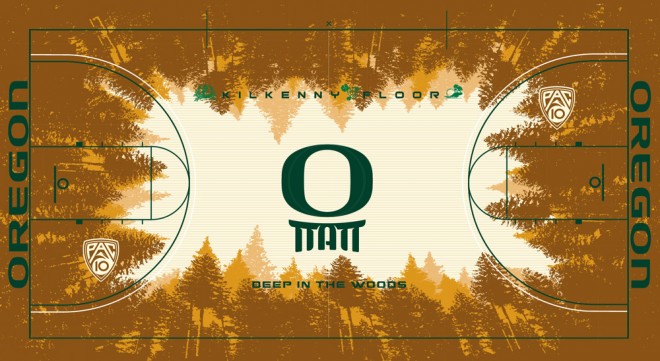 When the University of Oregon's Matthew Knight Arena opens in less than two months, players and spectators alike will be "wow-ed" by it's unique and intimidating basketball court, named Kilkenny floor. U of O Senior Associate Athletic Director Jim Bartko says it totally represents Oregon: "We got a court that was unique to Oregon and unique to the NCAA. And it kind of pays heritage to the tall firs, Matt Court, the history of Matt Court in a new building. And it is unique and we're getting a lot of comments on it, you know mostly positive, but we also have some comments like "what the heck is that?" so it'll shake it up a little bit.” Bartko says the arena, named for Matthew Knight, a former student and son of Nike owner Phil Knight, the University's Chief athletic benefactor. Matt Knight was killed in a diving accident several years ago. Kilkenny floor has distinctive graphics that give you the feeling you are looking up through a forest of tall firs. Bartko says they know the court will be intimidating to visiting teams, and that could be an advantage.