BEND, OR -- A missing one-year-old was found naked and alone, but safe Thursday, following a massive six-hour search just south of Bend. Sheriff Shane Nelson says the baby and his parents were living in their car off China Hat Road, and sometime in the night, the 18-year-old mother left the baby boy with 25-year-old Brandon Blouin.

Blouin later went to find the woman, taking Bradley Michael Thomas, who is not yet walking, with him. He set his son down about a mile from the vehicle, but couldn’t remember where. Authorities didn't know the baby was missing until Blouin showed up at a home on Sholes Road at about 6:15 a.m. asking for law enforcement. "We don’t know exactly when Bradley went missing," Sheriff Nelson tells KBND News, "But, from our best estimation, it was sometime in the night or early morning hours." Despite the urgent nature of the case, it was hampered by a lack of information from the parents, "The two adults were under the influence of controlled substances, which was part of the challenge of trying to figure out exactly where Bradley was. Initial reports that we had was the adult male had put him down 'by a fence'." 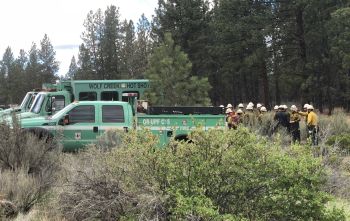 Searchers immediately mobilized on the ground and in the air, and Nelson says more than 80 people from multiple agencies got involved, "It was really incredible, the community support. Thirty-five firefighters diverted (pictured, right) and helped our Sheriff’s Office Search and Rescue team because their controlled burn had been called off due to our search. To get that number of resources in that short amount of time is an incredible miracle." DCSO SAR used drones for an aerial search and a National Guard helicopter equipped with a Flir camera was requested; although the baby was found prior to its arrival, and it was called off. 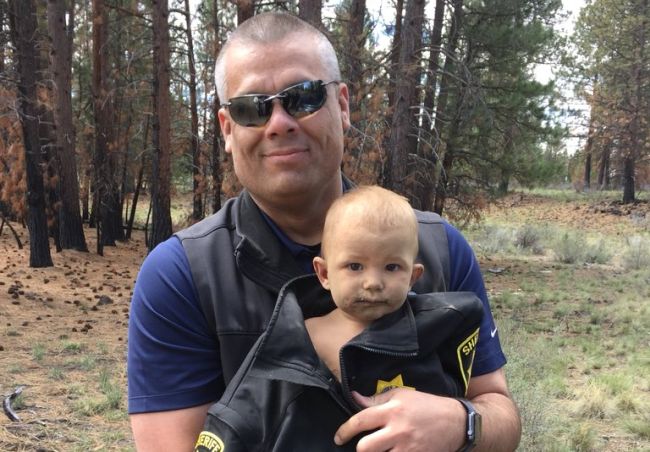 During the search, a Sheriff’s Detective took Blouin to retrace his steps, finding the baby just after noon, "Detective Jackson (pictured, right) looked over in the area where the adult male said we should locate Bradley, and noticed Bradley laying on the ground in the semi-fetal position on some pinecones and completely unclothed," says Sheriff Nelson. "He was asleep at the time, so when the detective woke Bradley up, he noted he was in excellent condition and we are just so happy to have found Bradley safe and sound." Sheriff Nelson says it’s a miracle the baby wasn’t hypothermic or dehydrated, or worse, "We have coyotes in that area, and all that comes into play when conducting these searches and when we’re trying to look for an individual – especially an infant."
Baby Bradley was treated by Bend Fire medics and taken to St. Charles Bend for evaluation, "We’re working with the Department of Human Services of the state of Oregon," says Sheriff Nelson, "They’ll have custody of Bradley and our office will continue the investigation into any possible neglect." Blouin was later arrested and is now in custody at St. Charles Bend. He faces numerous charges, including Criminal Mistreatment, Child Neglect, Endangering the Welfare of a Minor and Assault III. The assault charge stems from an injury authorities believe Bradley suffered while in Blouin's care. 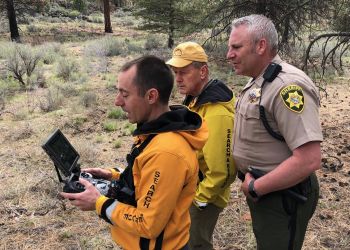 DCSO SAR utilize a drone during the aerial search for Bradley Michael Thomas.