Lt. Michael Biondi says they did not issue any trespassing citations on this first day of enforcement because the first priority is voluntary compliance, "To get folks to voluntarily leave the COID [Central Oregon Irrigation District], school district and county property. Notices were posted at all the entrances - at Highway 126, NE Ninth Street and E Antler - two weeks ago. So, folks have had notice. Everyone we've contacted has acknowledged they were aware this was coming, but some folks have fairly established camps." And, he tells KBND News, those will take time to pack up. "After discussions with COID, which most of the people are trespassing on their property, they are comfortable with us monitoring that and giving them a little more time. Because, again, a lot of these camps are very established and it'll take quite a while to get things removed."
Most people contacted Tuesday by law enforcement were calm but some have lived in the area for years, "Their biggest question is where should they move to?" Lt. Biondi says, "Unfortunately, it's difficult to point them in a particular direction. Some folks have opted to move to BLM temporarily until they can get their bearings and get a more long-term plan established, but that seem to be the biggest question."
He says they'll be back out Wednesday with a county work crew, "To begin clean-up. That will also be follow-up with folks that we contacted today to make sure that they're still continuing to do what we asked them to do and get the camps cleaned up. If we determine that compliance isn't going to be voluntary, then we'll have to continue with citations and go from there." Property owners have tried in the past to get campers to leave, but Lt. Biondi says this appears to him to be the most serious effort to clean out the large tract between Highway 126 and Antler, east of Ninth. 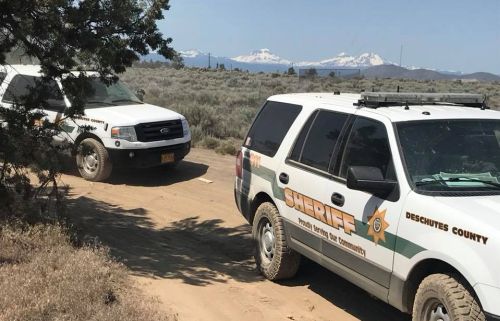 DCSO used four-wheel drive SUVs and pickups to traverse a maze of dirt roads that go through hundreds of acres of homeless camps east of Redmond.