BEND, OR -- With High Desert temperatures expected into the 90s for the sixth day in a row, more people are turning to air conditioners and fans to stay cool. But Courtney Cobb, with Central Electric Cooperative, says the local power grid is designed to put up with the strain, "You hear the stories in California with the roving blackouts. We have not had a situation like that." 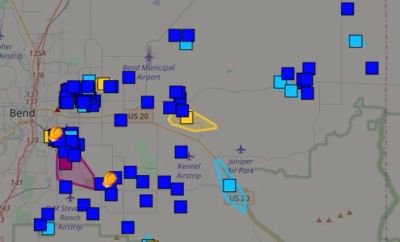 Last weekend’s outage on the east side of Bend is blamed on a bird that flew into a transmission line. It was the second local outage blamed on an an animal - in June, a bird pecked through the housing of a Pacific Power transformer. In both cases, the bird did not survive. Cobb says animal issues are not overly common. "Central Electric takes every advantage to put up mock nesting platforms for birds and put protection around a lot of our transformers so animals can’t get in there, but it does happen. It’s unfortunate that between Pacific Power and ourselves, we’ve had back to back issues." This most recent outage occurred on one of the hottest mornings of the year, but Cobb says animal problems can happen any time.
Cobb says additional usage during a heat wave may not cause problems for electricity providers, but it can significantly increase utility bills. But, there are things customers can do. She tells KBND News, "If you can use programmable thermostats, that’s going to help save you some money." She adds, "If you are away from home during the summertime and you have a/c running, maybe set your temperature for your thermostat at like 78-degrees. That way, you’re not paying to cool your home when you’re not in your home. And then we also suggest if you have ceiling fans, put them on medium, with the paddles blowing down and that’ll actually help to cool you a little bit more." In addition, keep cool air inside with properly caulked and sealed windows and doors. And, "Keep your blinds and stuff closed during the heat of the day; that’s going to save you because your house isn’t going to heat up as much."
Read All