BEND, OR -- Bend Mayor Casey Roats says he will not run for re-election in November. In June, Roats said he looked forward to serving another term on City Council because there was more work to do. However, In a letter released Wednesday, Roats says he cannot commit to the rigors of a campaign season. See below for his full letter. He made the decision while away focusing on his health, family and business. Roats plans to serve out his current term and looks forward to getting back to public service in the future.

The field of candidates vying for his Position six seat is getting bigger. Sarah McCormick announced Wednesday she plans to run. She's an Oregon native who moved to Bend four years ago so her husband could join his family’s business. She says she’s running because she’s seen how city rules and regulations impact small businesses; and as a mom, she wants Bend to remain a place she’s proud to raise her family.
McCormick joins Ron Boozell, Brian Hinderberger and current Councilor Barb Campbell in the race for Position Six. 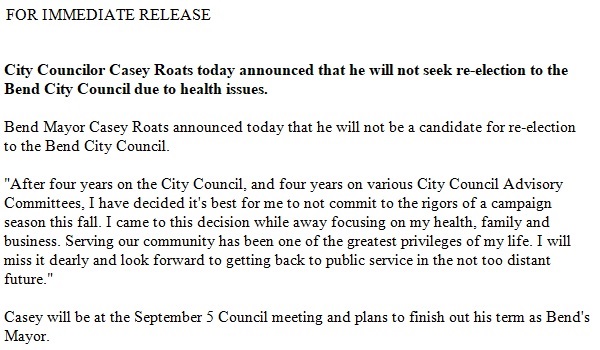