Posted About Four Years Ago by Brad Ford

ASTORIA, OR -- More than a third of Oregon’s Sheriffs want the state’s sanctuary law repealed. The Clatsop County Sheriff issued a letter Monday in which he and 15 other Sheriffs ask voters to throw out the 30-year-old Legislation.

Deschutes County Sheriff Shane Nelson signed the letter supporting ballot measure 105. Other counties represented are mostly rural, including Harney, Klamath and Lake counties. Click HERE to read the full letter.
They cite the recent murder of Iowa college student Mollie Tibbetts, allegedly at the hands of a man in the U.S. illegally. The statute bars Oregon law enforcement from arresting people whose only offense is being in the country illegally. 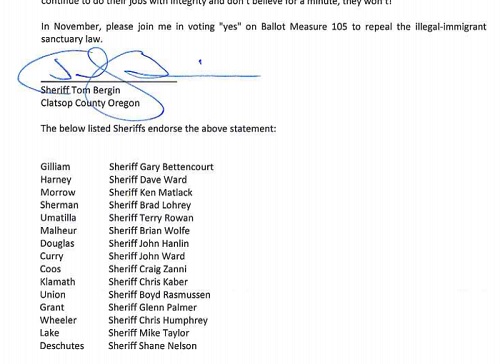