PRINEVILLE, OR -- Construction of Crook County's new jail is on schedule. Undersheriff James Savage says drywall is currently being installed, the roof is going on, and he expects it will be weathered in, early this month.

Savage says construction should be complete by the end of April, "From there, we'll be about a two-month training period where we'll work out all the kinks, make sure the doors work appropriately, make sure everything's functioning, and have a staff training during that time." He says the public will also be invited inside, "We've got a couple things planned. We're working on whether we want to let people stay overnight or just do a walk-thru type thing, so we have a couple ideas." He tells KBND News, "We'll have an Open House for the public before we actually bring all the inmates over, probably around July first." 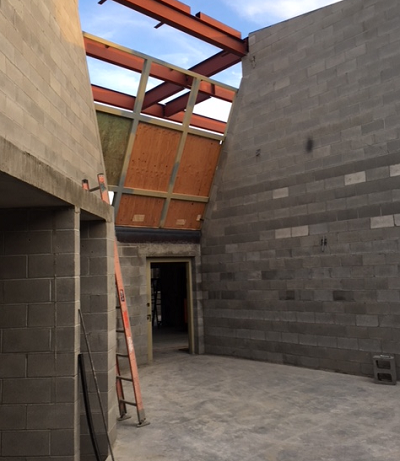 He says the new jail is being built with new features to keep inmates from re-offending, "One thing this jail is going to do is allow us to have programs to give them some work skills, so when they leave here they'll have some skills, rather than just go out on the street and come back in." There will also be opportunities for inmates to earn a GED. "You know, it's not just 'lock them up and feed them three times a day.' We are trying to get some productivity out of them while they're in, and so when they go out, they won't come back in."

The 76-bed facility is funded by a $10 million bond measure passed by voters in November 2016. Currently, most Crook County inmates are housed in the Jefferson County jail, through a lease agreement. That arrangement will end once the new jail opens in Prineville and inmates are transferred back to Crook County.