BEND, OR -- A 9'-deep avalanche slid down the northeast slope of Tumalo Mountain on Wednesday. Volunteers who went to investigate the slide and look for anyone potentially caught, noticed deep snow bike tracks along the ridge, directly above the slide. Motorized activity can trigger avalanches. Fortunately no one was hurt. 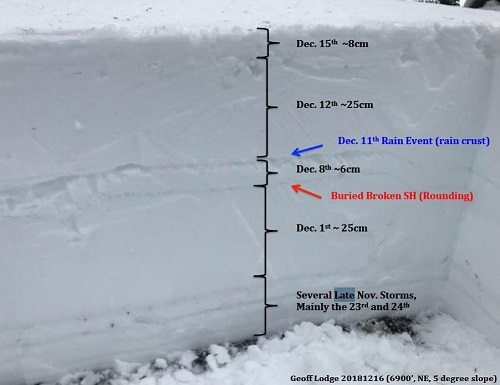 Central Oregon Avalanche Association's Allison Miles says they always watch for trouble on the slopes when frigid temperatures are followed by warm days. Volunteers started checking out the slopes after a light hoary snow fell, "It's just like snow's version of dew, which is not very strong. I mean, if you look at it, it looks feathery, it looks delicate, so when you stack a bunch of snow on top of it, that's how avalanches happen." Miles tells KBND News, "The temperature was hovering just about at freezing level, so the snow that came in was really heavy and wet, and what happened was it created this big, heavy slab on top of this unconsolidated, weak snow and that's just a prime recipe for an avalanche."

The slide traveled about a quarter mile. Miles has been told it was heard across the highway at Mount Bachelor Ski Resort, and even as far away as Todd lake. She says the avalanche took out roughly 60% of the snow in Tumalo's bowl and she's grateful no one was caught in it, "It's really the best scenario for us as a community, as we get this great lesson that 'hey, avalanches do happen, right in our backyard,' without having to deal with the tragedy that can often be associated with avalanches." She adds, "It's why it's just even more important for outdoor recreationists to know that the bowl, just because it's popular, doesn't mean it's safe, or at least it's not safe all the time."