SALEM, OR -- Representatives from the cities of Bend and Redmond, as well as Deschutes County, were in Salem Monday to lobby lawmakers to expand an affordable housing pilot project. Redmond and Bend were the only two cities to apply for the program, which was initially approved by the 2016 Legislature. It streamlines and fast-tracks the Urban Growth Boundary expansion process to allow for development of more affordable housing projects. The initial program only allowed for one city in each of two population categories. Bend and Redmond competed for the same slot and Bend was awarded the position in November. 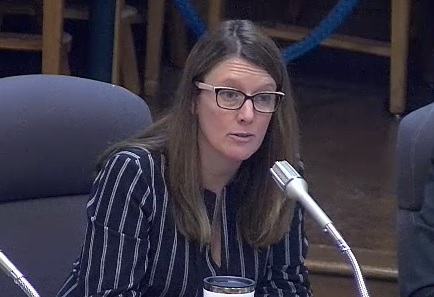 State Representative Cheri Helt (R-Bend) testified in Monday's hearing (right) that Redmond should be allowed in, too, "You can't have mental health stability without housing and we have a housing crisis. We have a shortage, and we desperately need workforce housing." Helt says until there's more housing across Deschutes County, there is no way for people to live in the cities where they work. "The issue that we're facing is a supply issue. We've heard the number of 155,000 units we're short in our state, and this would move the needle." She has joined fellow local lawmakers State Rep. Jack Zika (R-Redmond) and State Senator Tim Knopp (R-Bend) in supporting HB 2336, which would allow both Bend and Redmond to take part in the pilot project.

Redmond Mayor George Endicott (pictured, top) also testified at Monday's public hearing, in support of HB 2336. He told lawmakers affordable housing is much needed for smaller cities, "The price of housing far outpaces wages. Over the last few years, our housing prices have increased 52%, while we've watched wages go up an average of 2 to 3%." He says the average home price in Redmond is $289,000 dollars; whereas the average wage is about $40,000. The city already has a proposal ready to push forward, if HB 2336 is approved, "Our project has 50% affordable, 50% market rate, and it will be in a mixed income, mixed use setting." Endicott says the 485 unit development not only meets but exceeds requirements for the pilot program. Deschutes County Commissioner Phil Henderson addressed the committee and explained how increasing Redmond's affordable housing inventory benefits the entire area, "From a perspective of the growth and development of our region, we really are kind of housing-cost challenged throughout the county. It's not just a Bend problem, but Redmond and Sisters; it's everywhere. So, this will add another option."

Redmond's proposal is for a 40-acre parcel owned by Deschutes County, on the eastern edge of the city, near NE Kingwood. Bend's winning proposal will reportedly bring nearly 400 homes to 35 acres in the southeast corner of Bend, near Highway 20.