BEND, OR -- A group of volunteers installed duck nesting tubes in the Old Mill District, Monday afternoon. Chris Dittman, area chairman for Ducks Unlimited Oregon, says mallards nest on the ground, and the hay-covered wire units will protect eggs until they hatch, "A lot of predators, like raccoons and skunks, and stuff like that, will eat those eggs. And so, the success rate, typically, for a ground nest will be about 20%. And, if we can get these ducks to use these tubes, or they decide they want to use these tubes, the success rate should go up to 80% or higher." 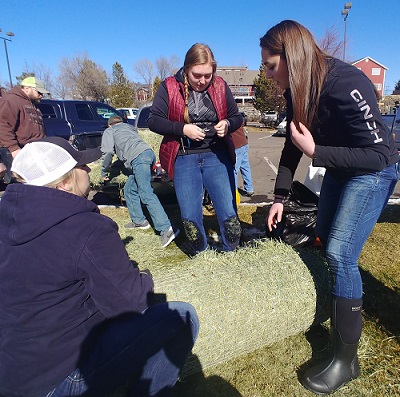 Waterfowl experts and 10 students with the Bend chapter of the Future Farmers of America (FFA) worked on the project, to create more habitat for mallards, "What they are is basically wire that’s been wrapped with hay. And then, on top of these tubes that we’ve hammered into the ground, we have cradles for us to zip-tie these tubes with hay into it," Dittman tells KBND News, "There’s going to be hay on the inside and insulation around the tube, as well, with hay in it, to be able to keep the ducks warm in there and the babies warm, as well."

The group installed nine tubes in the wetlands across from the Old Mill shopping area; two below the Colorado Bridge and seven above. Dittman says, "The mallards, you can see, are using this area already and so, it’s just a really good area that’s away from the public. There’s lots of area for them to be able to build these nests and not be disturbed in those areas; that’s really where we’re trying to get them. And, far enough back off the river where, in the summer, the floaters aren’t going to be able to reach out and grab them, either."

The project was paid for by the nonprofit Ducks Unlimited Oregon.