SISTERS, OR -- Two Central Oregon communities plan to ask for state grants, this week, to spruce up aging parks. Sisters City Council and Jefferson County Commissioners are expected to support applications to Oregon Parks and Recreation for the projects at Wednesday meetings.

Sisters Community Development Director Patrick Davenport says Village Green Park is the most popular in Sisters. The grant would pay for an all-abilities play structure, similar to Redmond’s Hope Playground, "We’ll have an approach from our ADA parking spaces leading to the structure and then have firm surfaces where folks that are physically handicapped can get around very easily. We have a bit of a climbing focus (below), but it’ll be low enough where folks that are, perhaps, in a wheelchair could also reach up and climb a little bit on them, of course, with some help." 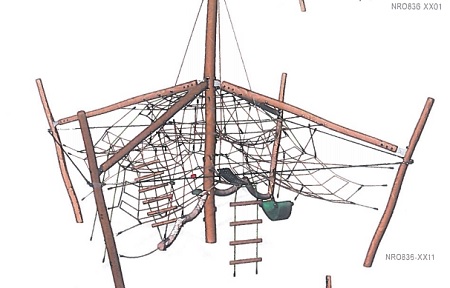 The existing structure (pictured above) would be moved to another, lesser-used park. Davenport says the final design for the new playground would be up to the public, "If we get the grant, we’ll go back to the community and ask them some particular elements on the new play structure." He says the Sisters request is for about 38%, or around $73,000, of the $190,000 project, which would fall into the "small grant" category of the Local Government Grant Program; the city would provide the other 62%.

Jefferson County Administrator Jeff Rasmussen says the grant could help pay for much needed upgrades at Panorama Park in Crooked River Ranch, "A place for a dog park and, more important, the community has indicated they would like some shade. So, in the grant, you’ll see a playground structure that has an umbrella, for lack of a better term, over it and a couple of picnic shelters." The park was built in the early 2000s with a play structure and bathrooms, but has never been updated. His county's application is for 80%, or about $155,000, of the estimated $194,000 project, putting it in the "large grant" category. Rasmussen says, if the grant is approved, the other 20% of the funding would come from local sources, "And we’ve had some initial conversations, trying to figure out what the scope would be and if the county would be requesting the [CRR] homeowners association to contribute."

Because Sisters is applying under the small grant category and Jefferson County is vying for a large grant, the two are not competing for the same money. Davenport tells KBND News, "I hope we both get it; I hope we get it and Jefferson County does, too." Oregon Parks and Rec announces grant winners in late summer. If the local applications are approved, work could begin as early as next spring.