BEND, OR -- Four people face numerous charges in connection with drugs smuggled in to the Deschutes County Jail. Sergeant William Bailey says the investigation began in January, when authorities discovered inmate mail laced with Suboxone, hidden in the seams of manila envelopes, "Suboxone is typically prescribed by medical professionals to assist with detoxing from opioids. Suboxone can be abused and it is capable of producing a significant euphoric affect." He tells KBND News it's administered on thin strips of paper that melt on the tongue, "The Suboxone itself is a very thin, ribbon-type of material and so it was easily concealed within this thicker seam on the envelope." 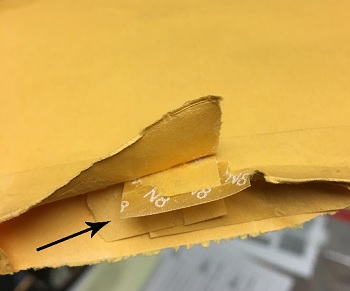 The Sheriff’s Office Street Crimes Unit began investigating in January, after the drug-laced mail was discovered, "This bottom seam was being opened up through either steam or other type of a heat process. The controlled substance, in this case the Suboxone, was being concealed inside and then the envelope was being sealed back or glued back closed. So, it appeared, at first glance, that there had been no manipulation to the envelope." Sgt Bailey adds, "The investigation did find that there was a component of the controlled substance being used in the facility and sold. The investigation is still ongoing and we do anticipate more arrests."

Deborah Anderson, a 58-year-old Portland woman, is accused of sending the drug to her inmate son, 29-year-old Phillip Anderson (pictured: upper left). She was arrested after a search of her southwest Portland home turned up meth, heroin and drug paraphernalia. Another inmate, 32-year-old Derek Chamberlain (pictured: lower left), allegedly received his drug-laced mail from 29-year-old Zachary Hahn, of Bend (pictured: lower right). Sgt. Bailey says the four may have been working together in some capacity, "We do think that there was some training, or involvement, between the Anderson mother and son, and the other two parties."

The case could lead to changes at the Deschutes County Jail, "Inmates are allowed to receive mail; the items are searched for contraband and weapons," says Sgt. Bailey, "But, criminal mindset was able to find a weakness and able to find a way to get this substance in and so we will have to make changes to prevent this from being utilized in the future."