BEND, OR -- Congressman Greg Walden says he’s supporting a grant request by the Oregon Department of Transportation, to help fund the realignment of Highway 97 at Cooley Road, on the north end of Bend. "We know you’ve got 30,000 Bendites driving to Redmond, and vice versa, every day; and then, another 20,000 visitors coming in the summer, every day," Walden tells KBND News, "And we just don’t have the capacity anymore, on the existing system."

He met Monday with city and county leaders, as well as ODOT, to discuss the project. ODOT Regional Manager Gary Farnsworth says it’s Region Four’s top priority. "It’s the key, really, for long term, in this area, when it comes to transportation. It really reflects a lot of what’s happening here and where we need to stay, in terms of keeping up." Farnsworth told Rep. Walden state and local governments have already committed funding. "To see this much investment commitment by the local jurisdictions speaks volumes to the relative need, from both the county and the city, and even private sector. And, I can tell you, there is a lot waiting in the wings from the private sector perspective that would want to contribute into this to make it work." 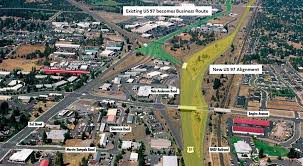 Bend Mayor Sally Russell told him the project is long overdue, "That information has been out and has been through the public process for such an extended period of time, so it’s more about waiting and knowing it’s going to happen, and sort of the ‘when?’ question." City Councilor Justin Livingston and County Commissioners Patti Adair and Phil Henderson also took part in the meeting.

Walden says it was important for him to fully understand why the project is so necessary to address congestion, "So that I can articulate this better to the Department of Transportation at every level, including at the secretary level, to explain why this is such a priority."

If ODOT doesn’t get the $67 million INFRA  grant from the U.S. Department of Transportation, Farnsworth says the project could still move forward with money already secured from state and local governments. But, he tells KBND News, it would happen much more slowly and in more phases. This is ODOT's second attempt at securing federal funding for the project. Because environmental impact studies are already complete, he says the project would take about two years, once its fully funded.