LA PINE, OR -- The search continues for 29-year-old Michael Mead, who is presumed to have drowned last week at Wickiup Reservoir. Deschutes County dive teams continued through the weekend to look for the Bend man in a 17-acre  area around where his canoe capsized. Sergeant William Bailey says Mead disappeared in difficult conditions, "It was dark – two in the morning. The surface temps and air temps may be warm; we’re up in the 80s and 90s during the day; surface temp on the lake is running around 60. But, down below the surface, down near the lake floor, it’s much cooler – in the 40s. So, a person can become very exhausted quickly, and succumb to those cold temps." A Klamath County Sheriff's Office team arrived Friday with special sonar equipment. "We did recover some gear from the canoe when it capsized," says Sgt. Bailey, "But visibility in the water is pretty low, with inches up to a foot or two at times."

The day after the Wickiup incident, the Jefferson County Sheriff's Office says a man appears to have drowned in Lake Billy Chinook. He has not been identified and his body has also not been recovered. 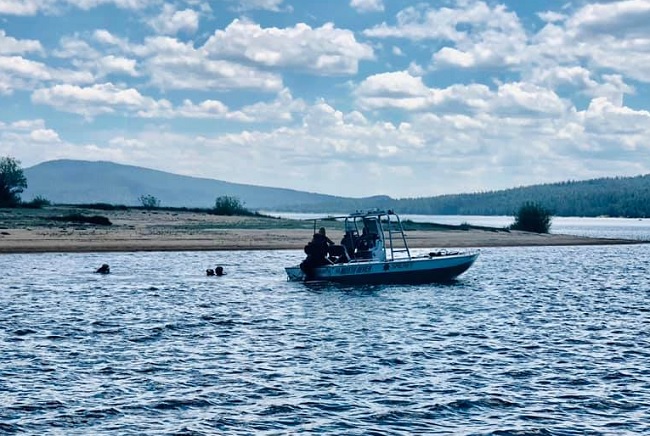 Mead and 24-year-old Daniel Ganley were in the canoe with a dog, when the boat overturned at about 2 a.m. Thursday. Ganley and the dog made it back to shore; Mead did not. No one was wearing a life jacket, which Bailey says could have helped save Mead, "The old day and age of the bright orange, square foamed life jackets, you know, just aren’t the case anymore. There’s lots of options that are very comfortable. There’s auto-inflating life jackets that are very slim and low-profile that don’t encumber you when you’re out on the water recreating. They can save your life if you end up in the water unexpectedly." And, Bailey tells KBND News, alcohol appears to have been a factor, which can make it more difficult to survive cold water and frantic conditions. "Hopefully someone hearing this story thinks twice and wears a life jacket when they’re out on the water, thinks about use of alcohol when recreating and being out on the water," says Bailey, "And save a family from a tragic ending."

For now, Mead is considered a missing person. He's a white male, 5'6" tall and 170 pounds, with brown hair and blue eyes and tattoos. He was last seen wearing black pants or shorts, with no shoes or shirt. Anyone with information is asked to call the Sheriff's Office at 541-693-6911.