REDMOND, OR -- Redmond Police are investigating claims officers used excessive force during an altercation with a small group of people connected to a suspected drunk driver. Lt. Curtis Chambers says it started Saturday afternoon with a call near Northwest 12th and Sprucewood Court, "[A] DUII driver nearly struck a small child in the neighborhood." The driver was later identified as 39-year-old Brett Blake. "That person was confronted by the parent of the small child," says Lt. Chambers, "The DUII driver drove away and these friends and family members confronted the parent of the small child."

That confrontation with the child's parent, and concerns Blake was still behind the wheel and leaving the scene, prompted calls to police. "Officers responded to the area, found the suspect vehicle driving back to the location; attempted the traffic stop. The driver didn’t stop right away. [He] continued driving, nearly rear-ending another vehicle that had already yielded for the police officer because he had his lights on." Eventually, officers arrested Blake without further incident. He's charged with DUII-Alcohol, Failure to Perform the Duties of a Driver Involved in an Accident, Reckless Driving and two counts of Recklessly Endangering Another. 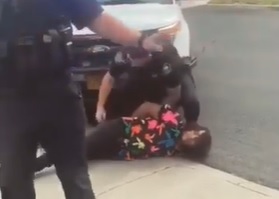 After Blake was taken into custody, four others allegedly confronted officers. The altercation was captured on a video that's going viral on social media. In the video, which appears to be edited, officers are seen arrested two males as several people are heard cursing and yelling "police brutality." A woman filming appears to drop her phone as police take her into custody. Blake's wife, 40-year-old Marlana Blake, is charged with Interfering with a Peace Officer; three others, 19-year-old Lorence Ortega, 19-year-old Kameron Leisek and 18-year-old Cash Reese, are charged with Menacing, for the altercation with the parent, Interfering with a Peace Officer and Resisting Arrest. Lt. Chambers says the three teens share an address with the Blakes. He also notes two officers suffered minor injuries in the scuffle, including bumps and scratches.

Chambers tells KBND News Redmond PD takes all claims of excessive force seriously and the entire incident is now under review, including the cell phone footage. But, he says, that's not the only evidence, "Our police department does utilize body cameras. This incident was captured directly in front of a patrol car, which captured everything with its dash camera." Uses of force are rare in Redmond, "From 2014-2018, the Redmond Police Department arrested 16,446 people and of those, only 137 required a use of force," says Lt. Chambers. That's less than 1%. He adds, "All of those uses of force were deemed within policy and acceptable by state law." Chambers says once the internal investigation is complete, it will be forwarded to the Deschutes County District Attorney's Office.