BEND, OR -- Central Oregon fire crews stayed busy over the last 24 hours. An Awbrey Butte home was destroyed by a blaze reported just before midnight. Bend firefighters remained on scene through the night and ask the public to stay away from Northwest Craftsman Drive, Friday, as they continue mop-up and investigate the cause. Callers reported the back of the house on fire; and when crews arrived, they found the garage fulling involved with flames spreading to the inside of the house. The blaze caused nearly a million dollars in damage, destroying the home, all its contents and a car.

UPDATE: Bend Fire says the cause of the fire on NW Craftsman was the improper disposal of legal fireworks. Officials say the used fireworks were put into a trash can in the garage without soaking in water. They urge everyone to soak fireworks for at least a day to prevent their accidental re-ignition. 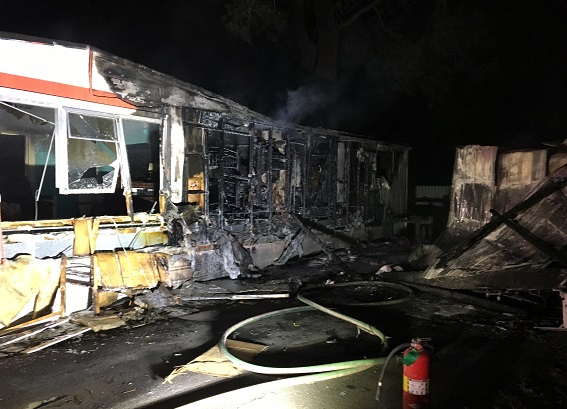 A southeast Bend mobile home and carport were also destroyed by a fire (right). Investigators say legal fireworks were placed in a cardboard box in the carport on Southeast 27th; the blaze was discovered a few hours later.  All five family members escaped without injury. Because Bend Fire units were still on-scene of the fire on NW Craftsman, Redmond and Alfalfa Fire crews assisted by sending additional crews and equipment to SE 27th.

And, Near Lake Billy Chinook, Jefferson County firefighters responded to a report of smoke in the Crooked River Campground, Thursday night. A Sheriff’s Deputy and Fire Lieutenant climbed down into the canyon and put out a small fire they believe was started by fireworks. The Fire chief says the Deputy used a bladder bag backpack pump issued to him by the fire district.

Jefferson County Fire was also called to a vehicle fire partially blocking Highway 26, north of Madras, just before midnight (below). There were no injuries in that incident, but the pickup was a total loss. 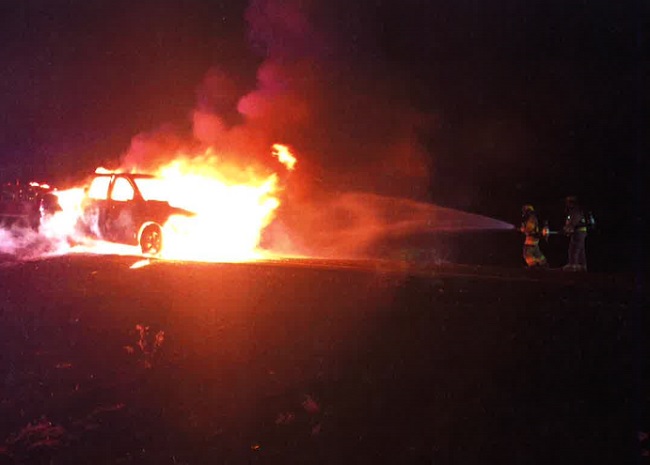