BEND, OR -- The Deschutes County Jail is now using a body scanner to look for contraband before inmates are booked. "So, if somebody comes in to our facility and they are going to be housed in our facility, they will now go through the body scanner," says Corrections Deputy Lori Barin, "That provides us a picture, and that picture shows us whether or not there’s anything inside." Jail Commander Michael Shults tells KBND News, "We’re going to be looking for drugs, weapons, needles, anything that we can that’s not allowed in the jail that can make somebody unsafe – not only us, our staff, but the other inmates." 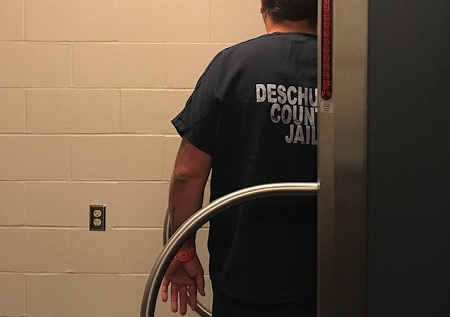 An inmate moves through the large machine on a conveyer belt (pictured: right) as the scanner sends an x-ray image (above) to a nearby computer. A Corrections Deputy can then see whether drugs or weapons are hidden inside their body or clothing. Dep. Barin says it's a much less invasive process than the previous search procedure, "We would take them in and do a pretty invasive visual dress-down, so that we could ensure that they didn’t have anything inside any body cavities."

A Deschutes County inmate died at the jail in 2014 of a meth overdose. Then-Sheriff Larry Blanton speculated at the time that Edwin Mays ingested a baggie of drugs in an attempt to conceal them from arresting officers. KBND News asked current Sheriff Shane Nelson whether that case prompted the purchase of the new body scanner, "This is not related to any one specific act or piece of history for our office. But, yes, some of the tragic circumstances that have occurred here definitely spur us to take a look at good pieces of equipment." He adds, "I can tell you, having a piece of equipment like this will hopefully prevent a future tragedy." Capt. Shults says while nothing is 100% effective, this new technology will help, "All the jails are trying to find ways to stop that. Now, it’ll never be stopped because inmates get good at it and the people that come through our system are vulnerable people and they’re already at risk to these type of things. But, the goal is really, so that people, when they come in, don’t have dangerous materials on them that can hurt them or us."

Sheriff Nelson calls the $125,000 body scanner a good investment, and says the Oregon Sheriffs’ Association helped negotiate a price break for 11 agencies to purchase scanners this year. "Our office is really excited to have this piece of equipment," says Nelson, "This is going to make our jail a lot safer, it’s going to protect inmates who try and bring this contraband into our facility and it’s going to protect inmates that might have access to this contraband in our facility." The scanner has been in place a few months and Nelson says it has already prevented a significant amount of contraband from entering the jail.