BEND, OR -- A horse rider was injured on the trail near the Quinn Meadow Horse Camp, located off Century Drive between Devils Lake and Elk Lake, Saturday.

57-year-old Robert Laroe of Creswell, OR was reached by rescuers at 1:54pm, about a mile down the trail from the horse camp. He was treated for potentially life-threatening injuries at the scene, and transported via wheeled litter from Quinn Meadow to a waiting helicopter. 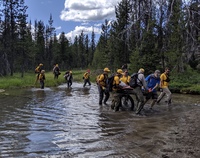