Posted About One Month Ago by KBND News

BEND, OR -- Bend Fire & Rescue responded to a report of a small "outside fire" in southeast Bend, near Robal Lane and Nels Anderson Road, just before 1:30 p.m. Monday. Before crews arrived, 911 received more calls of a rapidly growing brush fire on the east side of the railroad tracks in the area, possibly spreading to a shed. 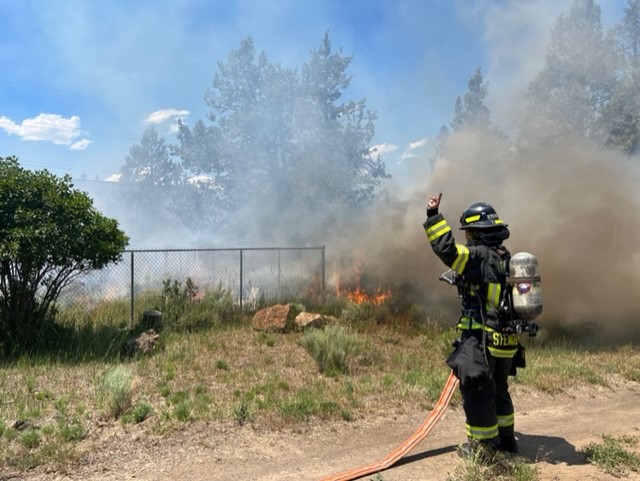 When they arrived, they found a fast moving fire on Raymond Ct. Everyone in a nearby home evacuated safely with their two cats, and neighbors were spraying flames with a garden hose.

The fire was quickly knocked down, and crews remained on scene for approximately 90 minutes to mop up and ensure no spot fires. An older shed was destroyed, along with some belongings stored inside; damage is estimated at $500. Bend Fire & Rescue was assisted on scene by Bend Police, the US Forest Service, and BNSF.

Investigators discovered a train passed through the area about 30 minutes prior, and sparks from that train ignited tall grass and brush on the Raymond Court side of the tracks. Officials say fortunately, many of the fuels still have a high moisture content due to spring rains. They believe it would have been far more intense if this occurred 3-4 weeks further in to fire season.

They say, "Now is the time to look at your property, and prepare for wildfire season.  Cut tall grass, thin and remove excessive or dead brush, and limb up trees on your property. If you live within the boundaries of Bend Fire & Rescue, or Deschutes Rural Fire Protection District #2, we offer free consultations." Call 541-322-6386 to schedule an appointment.