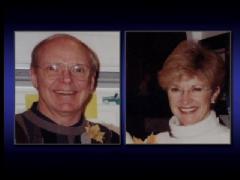 Investigators expect to release more details today on the search for missing Bend woman, Sandra Meyer. Her husband, John was found shot to death in his home on Wednesday. Police are not saying anything about his death, other than they're investigating whether it was self-inflicted. Officers have searched several locations for Sandra, with no success. Friends and family remain puzzled on Sandra's disappearance and the death of her husband. Sandra's husband claims his wife left for a book club meeting a week ago Wednesday night and was not seen since. Her car was later found in the Old Mill District parking lot.