CULVER, OR -- Central Oregon remains under a red flag warning, after lightning moved through over the weekend sparking several fires. The largest is the Fly Creek Fire (pictured), burning in the Sisters Ranger District on the Deschutes National Forest, near Balancing Rock. As of Monday morning, it's estimated at 280 acres and 5% contained. The Metolius arm of Lake Billy Chinook is closed until at least this afternoon and “go now” level three evacuation orders were issued for the Perry South and Monty campgrounds. Level two “get set” was issued for the Three Rivers area.

Four other fires in the area are also staffed with crews, along with two in the Ochoco National Forest.

The Tolo Mountain Fire (below) also continues to burn in the Crescent Ranger District on the Deschutes National Forest. As of Monday morning, it remains at 41 acres and is 50% contained. Crews continue mop-up efforts in the more remote areas of the fire. 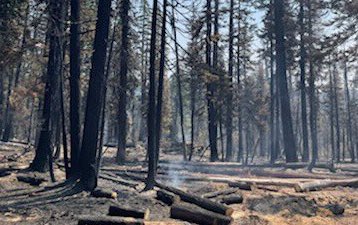