DETROIT, OR -- The Whitewater Fire continues to burn east of Detroit, prompting Deschutes and Willamette National Forest officials to close a portion of the Mt. Jefferson Wilderness "for the foreseeable future,” including during the eclipse. The northern section of the closure is within the path of totality. Closed destinations include Rockpile Lake, Cabot Lake, Carl Lake, Shirley Lake and Table Mountain. The Pacific Crest Trail is closed from Minto Pass north to Breitenbush Lake. Click HERE to view a series of maps showing adjacent National Forest lands that are open inside the path of the eclipse.

"We understand this is a disappointment to residents and visitors who looked forward to the opportunity to experience the eclipse in this area," Forest Supervisor Tracy Beck said in a statement released Tuesday, "Unfortunately, the risk is too great, and our highest responsibility must be visitor safety." She adds, 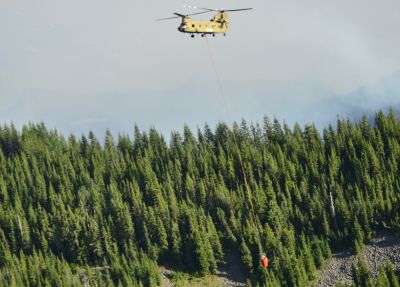 "Fueled by excessively hot conditions of the previous weeks, this fire has burned very erratically and some nights has moved more than a mile through thick forests."

About two-dozen Oregon National Guard personnel are assisting with suppression efforts, along with two Chinook helicopters equipped with nearly 2,000-gallon capacity water buckets. The 1st Battalion, 168th Aviation Regiment is based in Pendleton.
The Whitewater Fire started with a lightning strike and is burning in steep terrain. As of Wednesday morning, it's estimated at 5,580 acres and 0% contained.
Read All