REDMOND, OR -- Anne Graham resigned from the Redmond City Council, this week. She tells KBND News she’d considered stepping down for a while because of the deteriorating relationship between herself and the Mayor. "Anyone who’s been watching the interactions between the Mayor and myself will have noticed that we have not been getting along for the entire 2 ½ years that I’ve been on Council."

But, she says the final decision was made Monday evening. "A fellow Councilor very kindly brought the Mayor and I together in an offline meeting to try and see if we could work out our differences and it did not go well." Mayor George Endicott says she had a prepared letter in her purse, "At the conclusion of our meeting that lasted approximately an hour, Anne handed me a letter of resignation." He tells KBND News, "Yeah, I was surprised."

Graham says she also based her decision on new rules approved last week by the rest of the City Council. "I saw clearly that my ability to contribute to the future of the city was going to be even more constrained." She adds, "I voted against it; my colleagues voted for it. It appeared to me that those things were aimed at me. They were restrictions on contact with staff; restrictions on emails to staff." Mayor George Endicott claims the new rules have been in the works for nearly a decade and stem from an incident between a former Councilor and Public Works staff, not the recent ethics investigation and findings against Graham. And, he says the addition of sanctions for Councilors who 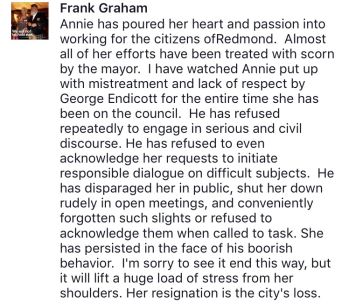 violate rules was based on conversations he had a year ago with an attorney from the League of Oregon Cities.
On her public Facebook page where Graham announced her resignation Monday night, her husband wrote that the Mayor refused to discuss difficult subjects and treated Graham rudely; claims Endicott refutes, "When I was talking with Anne, I said, ‘If you had an issue that you felt compelled to come before Council and I would not put it on the agenda, we do have a process where it can be put on the agenda by a series of Councilors.' That never happened." And, he says he is not to blame for Graham’s recent political problems. "Remember that incident with Kevin Fitzpatrick and the whole ethics thing that kicked all this off? If you look at the tape [of the City Council meeting] that night, I wasn’t even there."
Endicott says it will take at least two weeks to determine the process for filling Graham’s seat on Council. 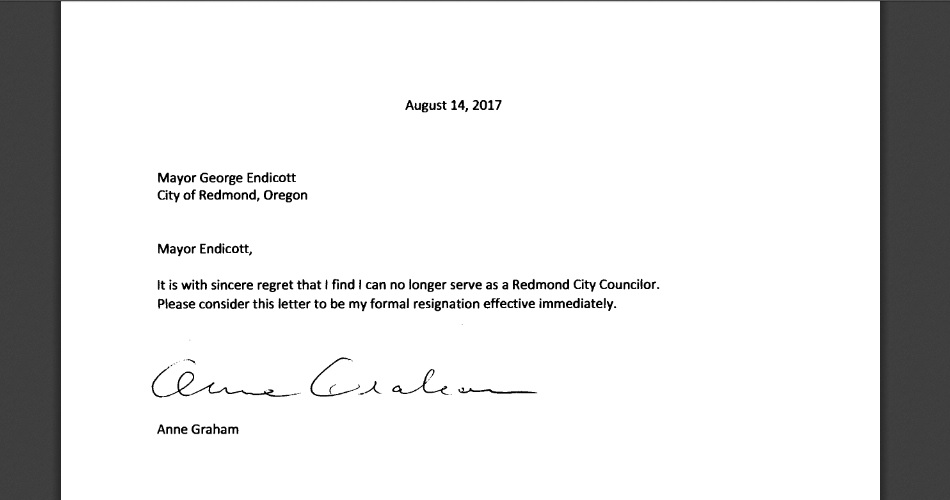